Complexion and facial rejuvenation: horizons on the therapeutic arsenal.

Complexion is a broad concept defined by the color, shade and radiance of the face, one of the first signs of skin aging.

Skin aging is due to several well-known factors(1), some of which can be modified by changes in lifestyle and others which cannot, such as the genetic part of aging or the estrogen deficiency of menopausal women, which accelerates aging.

Regarding extrinsic factorsPhoto-exposure, pollution and smoking are three exposures that are at risk of premature skin aging and can be acted upon through preventive measures, but their effects are closely linked to the phototype, which is genetic.

With age, thehe three layers of skin tissue are changing(2) with an overall trend towards tissue atrophy, a loss of skin elasticity and a change in the distribution of facial volumes.

The appearance of wrinklesThis is due to a conflict between paradoxical hypertonia of the subcutaneous muscles, which is not compensated by the skin tissue that has lost its elasticity.

The ptosis of the adipose tissue in the jowls and the bone resorption of the facial mass explains the changes in the distribution of facial volumes. (1)

Pigmentary modifications of the skin taking on a yellowish appearance, the appearance of pigmentary lesions (solar lentigos and actinic keratoses) and vascular ectasias also contribute to the loss of radiance of the face.

Today, the demand of patients for anti-aging medicine continues to grow, especially concerning the change of skin tone, which has led to the development of multiple techniques to improve it.

Peeling is one of the oldest techniques for improving the complexion.

Caustic preparations for skin exfoliation were used as early as antiquity and the first writings describing the properties of salicylic acid, resorcinol, phenol and trichloroacetic acid date back to 19ème century.(3)

The peeling consists of the application of a chemical substance on the skin, aThe purpose is to cause limited destruction of the epidermis and superficial layers of the dermis. It acts in 3 phases, successively an abrasion with desquamation of the epidermal and dermal layers, an inflammation allowing the dermal remodelling then a more or less long healing phase.

They are effective inheliodermal lesions (elastosis, atrophy and keratosis), pigmentary anomalies, wrinkles but also in the prevention of superficial skin cancers via the treatment of actinic keratoses(4). 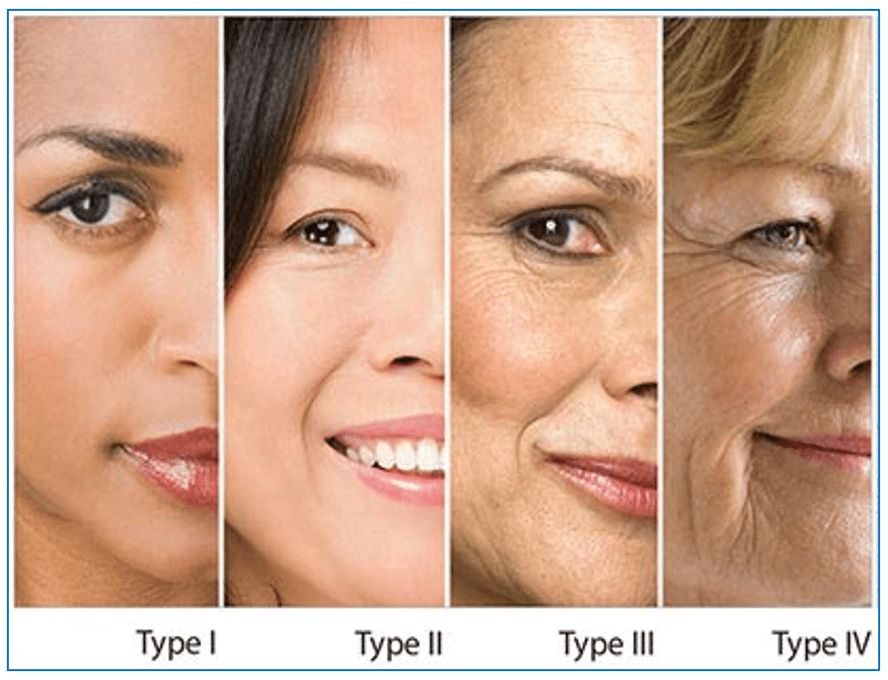 Choosing a peel involves taking into account the lesions to be treated, which can be classified according to their severity by the Glogau classification(5).

Peels can thus be classified according to their penetration in the different layers of the skin (6). The more severe the skin damage, the more necessary it will be to use a deep penetrating peel.

Epidermal peels, very superficial (VS) They only act on the stratum corneum and the granulosum. Used repeatedly, they refresh the complexion and improve the color and texture of the skin. Alpha hydroxy acids or fruit acids (glycolic acid 20/50%) are the leaders.

Medium peels (M). For which TCA 20/35% is mainly used, their aim is to reach the papillary dermis. These peels are particularly effective in the treatment of superficial wrinkles, actinic keratoses and some scars. TCA is a caustic peel. As it progresses, it is rapidly neutralized and causes the coagulation of skin proteins. Its action is simple, reproducible and proportional to the concentration and quantity applied. The depth of the peel is visually controlled by the changes in color and consistency generated by the transformation of the protein molecules.

Deep peels (P) are mostly phenol-based. They reach the reticular dermis, which is why one must be vigilant because re-epithelization will be based on the appendages and, consequently, areas with poor appendages will be at risk of poor healing. Phenol is a protoplasmic poison which denatures proteins, alters the cell membrane and leads to cell death. Its caustic effect is null, hence the addition of a caustic product such as croton oil to phenol solutions at pH 5-6.

Deep peels are indicated for severe helioderma and photoaging, solar lentigines, actinic keratoses, severe dyschromias and deep wrinkles. Another important notion to take into account when choosing a peel is the phototype because it will guide the type of peel as well as the pre- and post-peel care.

Patients with darker phototypes have a risk of post-inflammatory hyperpigmentation and may benefit from a pre-peel treatment with retinoic acid and hydroquinone.

Concerning the quality of the skin, oily skin, rich in sebaceous glands, must be degreased beforehand because the sebum constitutes a natural protection to the peel. Caution should also be exercised when treating reactive skin and certain areas, particularly the orbital, nasolabial and perioral areas (bitterness folds and labial commissures).

The last element that must be taken into account is the degree of acceptability of the patient, particularly in terms of social eviction. For example, facial peels with TCA > 30% lead to an inflammatory phase of 7 to 10 days and then crusts for about 12 days. The skin will regain a normal appearance in 2 to 6 weeks, sometimes more.

Laser is another technique that has been particularly developed for facial rejuvenation.

The target of resurfacing lasers is the intracellular water of the epidermal and extracellular layers of the papillary dermis. The skin smoothing effect is obtained by an immediate action via the ablation of the epidermis causing a flattening of the reliefs, an attenuation of the scars and wrinkles, a clearing up and a uniformity of the complexion, and by a late action via the thermal effect inducing a neocollagenesis proportional to the damage. The effectiveness of the laser treatment is therefore evaluated over time, at 1 month and 6 months.

They induce a complete destruction of the epidermal or dermal tissue depending on the energy of the laser and its wavelength. Skin resurfacing is done by skin renewal-sloughing-retraction.

A single session of CO2 laser or Erbium YAG laser is usually performed, applied to the entire face under general anesthesia. The subjects selected for this type of treatment are generally the same as for deep peels in terms of phototype and social eviction. Elderly subjects are at risk of permanent hypopigmentation or scarring in the case of high energy levels, so particular care must be taken with the use of ablative lasers.

Regarding the choice of laser:

They target the papillary and reticulated dermis without causing epidermal invasion. They induce a thermal damage, of coagulation, limited to the superficial and medium dermis. This thermal process induces an inflammatory reaction, followed by activation and fibroblast proliferation, leading to the formation of neocollagen and remodeling of the dermis.

The absence of epidermal effraction explains the better tolerance and simpler follow-up of this laser compared to ablative lasers. However, they cannot treat dyschromatic or irregular lesions such as actinic keratosis.

Non-ablative lasers include(8) pulsed colored lasers, Nd:YAG lasers, IPL/pulsed chromatic light... Healing can be facilitated by fractional use(9) This means that the waves are delivered via a filter leaving intervals of healthy skin. It is a delivery method that can be applied to ablative or non-ablative lasers and can vary the beam power, the size of the spots and the density of the impacts.

The use of fractional lasers is done under local anesthesia and it will be necessary to perform several sessions to treat the entire face and obtain a result similar to a non-fractional laser. The use of lasers to improve the complexion gives very good results, provided, as always, that they are used for the right indications and on the right patients. It is often interesting to combine, in the same session, a fractional non-ablative laser, a triggered laser or pulsed light to improve the complexion and the spots. The goal is to firm the skin while trying to lighten it to give a nice complexion that reflects the light well.

Microneedling can be added to laser and peeling treatments.

The principle is to stimulate the release of growth factors via the induction of lesions by micro-needles in the stratum corneum, the outermost layer of the skin(10)(11)..

Originally, microneedling was mainly indicated to activate the healing of bedsores and burns. Then we became interested in the interest of stimulating growth factors, outside of the healing process, to slow down skin aging.

The damage induced by the needles induces a controlled mechanical stimulation of the healing cascade leading to a remodeling of collagen into type I collagen and resulting in skin tightening.

Microneedling can be used to facilitate the transport of therapeutic molecules into the epidermis via the transient aqueous ports created by the passage of needles. For example, hyaluronic acid or cocktails based on dimethylaminoethanol, enzymes or vitamins can be applied in conjunction with microneedling to achieve better results.

Microneedling is therefore particularly interesting because it can be used at home, at a cosmetic doctor's office combined with a peel and LEDs, or as a complement to a facelift in the operating room.

What about surgery? Far from replacing surgical interventions, aesthetic medicine should be seen as a complement or sometimes an alternative.

Indeed, it puts the practitioner in the double role of doctor and surgeon, both by preventing risk factors that accelerate aging and by choosing the treatment to be offered to patients. Aesthetic medicine offers alternatives for patients for whom surgery was not adapted to their needs and allows us to offer patients for whom surgery is indicated a complement that boosts the results of a facelift or a blepharoplasty.

Autologous fat injection in the operating room is a good example of the close border between medicine and cosmetic surgery.

The principle is always the same: activate tissue induction. Fat, a tissue rich in stem cells, is a bio-inducer that has a direct action on the fibroblasts of the connective tissue. But the interest of this technique is twofold because the injection of autologous fat also makes it possible to restore the fatty volumes of the face. Indeed, the facial fat tissue is separated into compartments by the facial musculature and ligaments. With age, the redistribution and loss of facial fat tissue must be evaluated by the practitioner by distinguishing the superficial fat areas above the SMAS and the deeper fat areas contributing to facial expression and volumes.

Different types of fat grafts are chosen depending on the area to be treated (13):

The millifat for deep compartment losses and bone losses. Microfat for superficial fat loss above the facial musculature. Nanofat: an additional filter can be used to emulsify the fat to obtain nanofat, which is mainly used for tissue induction purposes.

Treatment with autologous fat grafting.  Il can be optimized by adding platelet-rich plasma (80% of fat for 20% of PRP).  Platelets release several growth factors, making them beneficial for tissue replacement and regeneration. The addition of PRP to fat would increase graft take and adipocyte proliferation.

There are many other techniques for facial rejuvenation and there are as many treatment plans as there are patients.

The medical and surgical arsenal today allows us to offer several complementary techniques, simultaneously or sequentially, in order to respond to patient demand. A good knowledge of these techniques can allow the practitioner to propose treatments whatever the age and whatever the skin type of the patient.

The secret to a good result lies with the practitioner who knows how to combine regenerative medicine and growth factor stimulation with facial rejuvenation treatments.