Some Questions about Appearance.

Considerations on Surgery and Cosmetic Medicine

During the course of my medical and cosmetic surgery teaching, I am asked many questions about appearance.

These questions are always very relevant, so I will summarize the ones that come up most frequently.

What is the relationship between requests for rejuvenation and appearance-enhancing procedures?

In cosmetic surgery, we distinguish schematically between:

This distinction makes it possible to highlight the goal that is pursued, but in practice these four categories overlap.

In this type of surgery, excess tissue must be removed and the remaining tissue is then fitted to recreate the desired shape.

The patients who seek body sculpting surgeries are most often patients who are currently, or who have been, overweight.

Generally speaking, these individuals have a full and fun-loving lifestyle that involves the enjoyment of the good things in life, such as food and drink.

The aim of body contouring surgery is to improve the way the body looks directly, or how it appears through clothing but, in practice, a slimmer silhouette almost always appears younger.

There may also be requests for "increasing" surgeries such as :

Do beauty criteria evolve over time?

It seems obvious that certain criteria evolve through time or cultures, such as roundness of bodies, degrees of tanning, and the fact that teeth are not represented in classical painting.

The Flemish painter Rubens (1577-1640), in his work The Three Graces, which takes up a mythological theme in which the daughters of Jupiter symbolize different aspects of beauty, presents three women who are rather curvy, whereas the current fashion is focused on thinness.

There are also general criteria of beauty that don't seem to have changed since antiquity.

Classical thinkers as early as Aristotle (385-323 BC) evoked symmetry, precision and harmony in proportions.

Numerous studies in experimental psychology have confirmed the relevance of these criteria[1].

Thus, if a sample of 100 randomly selected people are presented with two photos, one with a roughly symmetrical face and the other with the same face but that appears to be asymmetrical, the vast majority will consider the symmetrical face to be more beautiful.

Can we measure beauty?

There have been temptations in history, historically with the golden ratio[2] and more recently with the so-called cephalometric studies[3]. In fact, when these criteria are applied systematically, they lead to aberrations (see below).

Aristotle in his great wisdom did not consider the question of proportions in rigid terms, but simply as the fact that what we describe as beautiful would not be situated at the extremes.

Towards the end of the 15th century, Lucas Pacioli, an Italian mathematician and monk, defended a thesis expressing an ideal proportion based on a very particular number which would later be called the golden number or golden ratio.

In fact, this number has been known since antiquity, but only for some of its mathematical properties (as described by Euclid).

It has been argued that artists such as Leonardo da Vinci based their entire aesthetic canons on the golden ratio.

Yet, contrary to what may have been written in different sources, the famous Vitruvian Man is inspired by the proportions that were explained by Vitruvius himself, the Roman architect who lived in the 1st century BC, but this drawing does not actually use the golden ratio.

Vitruvius describes the ideal proportions of a temple, which had to be close to human proportions[4].

Da Vinci took this in the other direction to draw a man.

The confusion about the golden ratio comes from the fact that da Vinci and Pacioli were friends and that Da Vinci had illustrated a book by Pacioli entitled On Divine Proportion.

In fact, for his works, DaVinci relied much more on his own anatomical observations than on a mathematical system.

Do statistics make it possible to define ideal proportions?

Beauty seems to be situated within a wide range more or less remaining close to average measurements. This biometric method, known as cephalometryhas found its greatest field of application in the field devoted to studying the face.

This approach requires the use of teleradiographya special x-ray. Based on the x-ray reading, precise anatomical points are identified which are then used to measure certain angles.

Although underpinned by a very high level of scientific rigor, cephalometric analysis suffers from some limitations, the most important being related to calibration.

Each type of analysis calculates its averages over a reference population that may become questionable over time.

For example, Tweed's measure is based on a population of young (and overwhelmingly white) Americans from the 1950s.

It is questionable whether the results can be extrapolated, for example, to the study of the face of an African woman in her fifties today, or to many other people who are not similar to the reference population[5].

Can beauty be perfect?

The experience of our sense perception shows us, however, that academic criteria are not enough to define beauty, as a perfectly symmetrical face does not appear beautiful to us.

Digital photography offers the possibility of recomposing entirely left or right faces by inverting one half of the image and putting the two identical halves together. Experimental psychology studies have established quite significantly that the human eye prefers faces with different left and right sides, that is, slightly asymmetrical faces[6].

Comparison is a statement not a proof, but it is interesting to note that the towers of the Notre Dame cathedral in Paris are not symmetrical, yet this cathedral appears to be one of the most beautiful in the world, despite its recent fire. Perfect symmetry is unconsciously felt as artificial, strange, non-human and is ultimately not perceived as beautiful.

What is the best way to qualify beauty?

Charles Auguste Baud, a Swiss surgeon, in his book Harmony of the face published in 1967, described function as an intrinsic criterion of beauty.

It is certain that a group of people with a significant underbite (prognathism), to the extent that they have no contact between their upper and lower teeth, will appear less beautiful, statistically, than a group with functional contact between the dental arches.

The absence of contact between the teeth, however, also significantly reduces the stimulation of the bone supporting the dental roots, and in the long-term results in loosening of the teeth.

Similarly, it is easy to imagine that a respiratory disorder linked to a deviation of the nasal septum could result in a deformation of the nose.

In fact, the most frequent aesthetic consequence of this type of respiratory disorder is the early presence of bags under the eyes.

These patients most often consult us for blepharoplasty (eyelid surgery).

Clinical examination of this application must include ruling out a respiratory problem. Similarly, a receding chin or overbite (retromandibula) can promote snoring or, worse, an obstructive sleep apnea syndrome.

This syndrome results in a significantly higher rate of myocardial infarction and the daytime drowsiness that causes many road accidents.

Aesthetically, however, what will appear most clearly is a relatively wide cervical-facial angle (the angle between the neck and the chin), giving an impression of relaxation of the skin below the chin at an earlier age.

Many of these patients consult for a neck lift, but do not consult for this functional issue which they are often not even aware of!

The examples could be continued indefinitely, but what is important is to realize that function and aesthetics are much more linked than one might think.

The function not only creates the organ, it promotes the aesthetic impression.

The functional criterion in attractiveness is clearly an evolutionary advantage.

Functional criteria are perceived as advantages and therefore favored in terms of reproduction, regardless of the species, and then become assimilated to aesthetic criteria.

On the left, a patient with significant overbite and receding chin with a wide cervico-facial angle which therefore creates an older appearance. Above all, this patient should be concerned about a predisposition to sleep apnea syndrome and therefore a higher risk of cardiovascular disease.

On the right, the same patient after surgery with a more closed cervico-facial angle, appearing younger and with a reduced medical risk (case of Pr Jean-Paul Meningaud).

Example of a patient with palpebral (lower eyelid) bags at an early age, less than 30 years old, which is not part of normal aging and indicates a respiratory problem (case of Pr Jean-Paul Meningaud).

In conclusion: What is charm?

We have considered more or less precise criteria for beauty, all of them static except for a few functional criteria, but never from the point of view of emotional response.

A smiling face in love has more value than many facelifts.

When we analyze ourselves in the mirror, we do it with a still face.

However, in our social lives, we never see others from a strict and motionless profilebut rather more often from a 45-degree angle, so partly from the side, and in a social and emotional context of interaction.

A surgeon will never be able to operate on your emotions. 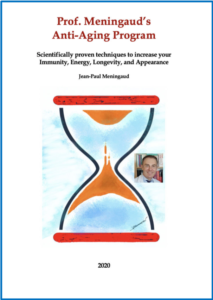 Jean-Paul Meningaud, MD, PhD is Professor, Head of the Department of Plastic and maxillofacial Surgery and Director of the ambulatory surgical Department at the Henri Mondor hospital (Hospitals of Paris). He has graduated in microsurgery and holds the HDR (postdoctoral degree authorizing the holder to direct the research of others). He received the James Barret Brown award in 2011. He is in charge of six University Diplomas in cosmetic medicine. He runs researches in regenerative medicine and aesthetic surgery. Certified Expert, Cour de Cassation (highest court in the French judiciary), he is a permanent member of the French National Academia of Surgery.

The year 2020 will have allowed everyone to realize the paramount importance of health.

Humanity will have been able to concede great sacrifices, unthinkable at the time when the unsurpassable horizon was growth.

It will also have made it possible to realize the importance of ecology. Our planet has taken a little rest, to the point that we have seen dolphins again in the Venice lagoon. Finally, it will have shown once again the fantastic capacity of man to adapt, since we have managed to continue to meet despite social distancing.

The AIME 2020 web congress will have fulfilled all its promises, allowing everyone to progress in aesthetic medicine and surgery and in anti-aging.

But man remains a social animal who seeks contact and does not sulk the pleasure of a discussion over a meal.

AIME 2021 will once again become an opportunity for us to meet again in the flesh. A hybrid part will be provided for those who cannot move around. The health crisis will have taught us to make this possible.

For AIME 2021, Dr. Barbara HERSANT has planned a fantastic program.

Innovation is part of AIME's DNA and of course it will be there.

The social program will allow us to dance on the Seine.

Looking forward to seeing you again very soon and maybe touching you.